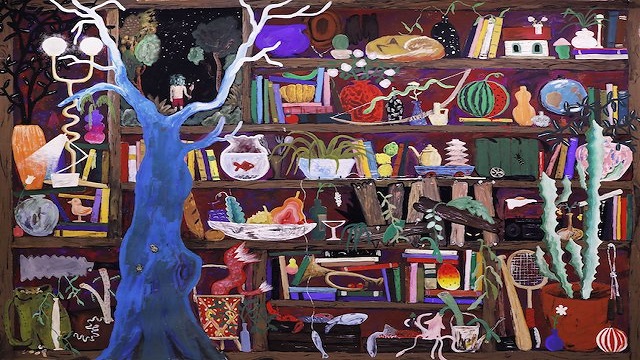 Yuichi Hirako, born in 1982 in Okayama Prefecture and now working primarily in Tokyo, has been producing art for which themes include the uncertainty and questions raised by coexistence between humans and the natural world. He intentionally portrays a vague representation of the boundaries between the internal (human society) and the external (the natural world), such as a human with a plant head or the inside of a room filled with overgrowing plants. A situation in which people and man-made objects coexist at the same level with nature could be a utopian world or a chaotic one.

We have various relationships with plants. We live together with house plants indoors, or we longingly re- create quasi-forests in gardens or parks. Some of our ancestors also gave special meaning to them. In my country, Japan, even plants have been given a God-like symbol of worship called “Shinboku.” Although plants live so close to us and share our living space with us, we might not be as conscious of their presence compared to other living beings that coexist with us. We do not share a bed with plants, nor do we directly communicate with them as we might do with other living beings. Despite their close presence, there is a clear boundary between humans and plants in the physical world.

The forests have been identified as both a place of sacredness and a habitat for devils. They have been viewed as uncivilized, barbaric objects of hate in Christianity and as holy sanctuaries among Animists in my country Japan, although such associations might not be as prevalent today. Nevertheless, these associations have something to do with the supernatural, something that transcends our human understanding.

If the plants are the children of the forests, they might really be the incarnations and more easily accessible versions of spirits, the Divine, or the Devil. Since plants are so unconsciously part of our daily life in our modern society, I see a lot of instances where the relationship between the plants and us humans is very ambiguous. The ambiguity stirs up my imaginations and imageries of various rich contexts between the human beings and the plants, and it inspires my works a great deal.